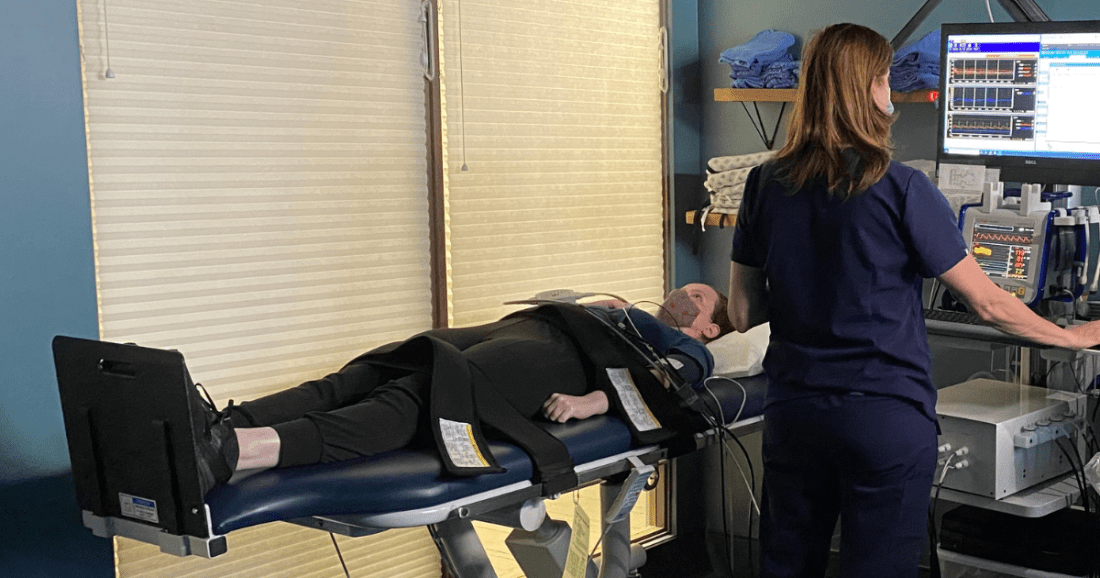 When I heard my MCAS specialist did autonomic testing, I should have felt grateful. Many people with mast cell activation syndrome (MCAS) and Ehlers-Danlos syndrome (EDS) also struggle with dysautonomia, dysfunction of the autonomic nervous system. (See also: clusterfuck.) Despite being diagnosed with MCAS five years ago and having the symptoms of dysautonomia, no one referred me for testing.

To be honest, I was scared. While relaying your pee to your refrigerator for 24 hours for MCAS testing is exhausting, I’d heard too many stories about people fainting and vomiting during autonomic testing. While I was so dizzy in the first years of my MCAS diagnosis that I often crawled across my condo, I never actually passed out. Sometimes the fear of not knowing is worse than the experience.

I knew standing increased my blood pressure and made me feel terrible. When the pandemic began, the lines at grocery store deterred me from getting food. Luckily, I can now afford delivery, but some items are not available. If I have to go into a I store, I lean on a shopping cart to avoid losing my balance. After falling down the stairs several times, I stopped using them completely. (On more than one occasion, I’ve been asked if I avoid the stairs because my service dog is too short. Why is it so hard to accept invisible disabilities?!)

Knowing fully well you may be minutes away from passing out or vomiting, the first task after being strapped to the Frankenstein table is to be totally calm to get a baseline reading of your vitals. After five years of MCAS and one epidural blood patch, I excel dissociating from my body. Super handy for medical procedures; not so great for processing emotion. (See also: reasons I need therapy.)

The goal of the tilt table is to measure your blood pressure and heart rate when you go from lying to standing. By using the table, instead of your muscles, we can better understand if the brain signals to the body are lagging.

“Okay you ready?” my doctor asked. I nodded and she pushed the button. The table motor chugged as it hoisted me up to 70 degrees. I braced for the worst.

As the table stopped rising, the pull of gravity took over. Within that split second, I decided:

What I remember is the heaviness of my body and my doctor’s incessant questioning. I felt like I was wearing a Kevlar suit and about to be sucked through the ground. I decided I would fight the tilt table with deep breathing and calm thoughts. As everything became quiet, dark, and slow, I tried to focus my eyes on a spot on the carpet like they teach you in yoga to keep your balance. Same thing, right?

What actually happened was documented by video. My doctor asked, “How are you doing?”

I WAS NOT GOOD.

“Any dizziness?” she asked.

“Any headache?” she asked.

SHUT UP. I AM BEING CRUSHED INTO A TINY DIAMOND.

Instead of speaking my mind, I politely closed my eyes.

Within a few minutes, the pressure subsided and I just felt weak.

After 10 minutes, my doctor lowered the table and asked, “How are you feeling?”

“My legs are all tingly,” I said. “There’s pain in my muscles.” Then I realized the pain was the blood rushing back into my legs. They had been numb the whole time I was standing.

As my doctor calculated the results, I recall all the times I had a heavy feeling. I described it in 2018 as almost a paralysis.

“Your heart rate did not jump. This is not a diagnosis of POTS,” my doctor explained. “What we are finding is you had an adrenergic response meaning your blood pressure jumped and you were symptomatic.”

Although I expected the blood pressure rise, I was surprised my heart rate stayed normal. My doctor explained that my results supported the evidence that when I am triggered, my body maintains the reaction. In other words, I get stuck in flight or flight.

“So we’ve got three more tests,“ she said.

When my doctor explained the deep breathing test, breathing in and out deeply for one minute with the help of a computer screen, I was like:

I TRAINED FOR THIS MY ENTIRE CHILDHOOD IN THE ASTHMA CLINIC. AND I PLAYED THE TUBA.

I was feeling pretty confident after surviving the tilt table. While my deep breathing performance was perfection and my heart rate was normal, my mast cells protested.

She retrieved a blanket.

“My chest hurts,” I said, remembering that bronchospasms can often feel like a heart attack.

“Yeah, until my jaw pops out,” I replied.

Luckily, my jaw did not pop and my CSF blood patch did not blow, but honestly, this was my least favorite test because worried about my Ehlers-Danlos syndrome (EDS) complications. My results showed a slightly delayed sympathetic response, unlike my tilt table test. Perhaps, my body was starting to wear out from testing. This test triggered a wicked headache that built for 12 hours.

After the surviving the tilt table, a little electricity didn’t fluster me at all. Four small plastic cups were taped to forearm, foot, and leg to measure amounts of sweat, or sympathetic response, generated by a mild electrical current. Sympathetic nervous system

“It does feel a little prickly, but I think you’ll be fine,” my doctor said. “How are you feeling?”

“Maybe that’s an understatement,” she said.

WHO THE HELL DESIGNED THESE TESTS?!

For me, this test was tolerable, not really any worse than a MCAS skin reaction. My sweat was slightly low in a few places. No surprise, as I often skip my deodorant stick with no repercussions.

As barbaric as these tests may sound, I am now very grateful I was able to access them.

My doctor diagnosed me with hyperadrenergic dysautonomia. Is it possible I had POTS, another type of dysautonomia, at one time? Very likely. The tests can inform treatment and further testing, but just like MCAS testing, the results can change over time and treatment still requires trial and error. I also tested negative for small fiber neuropathy (think tiny melon ball-like scoops of skin).

I’m looking forward to sharing my major improvements on new treatments– not beta blockers, which can exacerbate mast cell reactions. Aside from treatment, there’s a lot of value in a formal diagnosis for other providers to understand my body’s reactions and to support disability accommodations. For example, one doctor was so obsessed with my high blood pressure that she dismissed my CSF leak. Now I can explain my hyperadrenergic response.

After my long day of autonomic testing, my friend asked, “Do you want to go out and celebrate?”

“Yes,” I said, suffering from one of the worst migraines of my life.

P.P.S. To see a clip of my tilt table test, check out my YouTube channel.

P.S. Check out this 2021 research study on dysautonomia in hEDS patients. I strongly believe anyone with MCAS, EDS, or dysautonomia should have access to testing for all three conditions.

Please enjoy my interview with Jeannie Di Bon about living with mast cell activation syndrome (MCAS), Ehlers-Danlos syndrome (EDS), and dysautonomia. In this episode, I explain how I’ve been suffering from these conditions literally since birth, even though I didn’t get diagnosed until age 29. I also share my tips for living with chronic illness, joy of dog agility, and hopes for MCAS, EDS, and dysautonomia patients.

In a world that generally doesn’t understand the challenges and limitations of hypermobility, I have appreciated Jeannie Di Bon’s exercise videos for years. Jeannie herself lives with MCAS and EDS. I believe we need more practitioners and therapists, like Jeannie, who truly understand these diseases and advocate for patients. Learn more about Jeannie Di Bon. 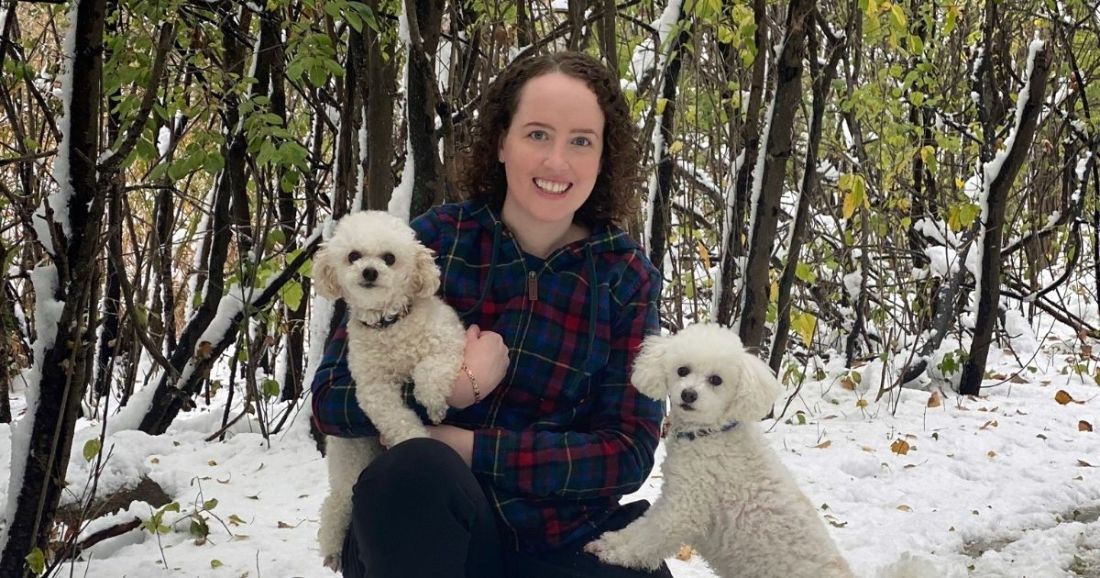 Five years ago, on December 22, I was diagnosed with mast cell activation syndrome.

As I entered the university’s cancer clinic, greeted by Christmas decorations and a volunteer dressed as an elf, I braced for a possible death sentence. For better or worse, my pain and exhaustion numbed my fear. I had spent the entire year unsuccessfully pleading with doctors to help me as I lost my ability to eat, move, think, and sleep. All I knew for sure was my lab work was positive and something was wrong with my mast cells.

Of course, I had never heard of a mast cell and I had to wait for an appointment. One lab test noted, “Systemic mast cell disease is a heterogeneous disorder.” So I googled “systemic mast cell disease.” After reading Mayo Clinic’s page several times, I surmised I had two diagnostic possibilities: systemic mastocytosis or mast cell leukemia. The median survival rate of mast cell leukemia after diagnosis was 6 months. I joined Facebook groups for mastocytosis, where some people briefly mentioned “a newer condition called MCAS,” but nobody could tell me if I was going to die.

Spoiler alert: I’m not dead yet.

While I felt like the most tragic soul on the planet sitting in that cancer clinic waiting room and glaring at the cheerful elf, I know now my diagnosis was arguably a Christmas miracle. I had walked a mere 5 blocks across campus and paid a $35 copay with no awareness that I was seeing a world-leading specialist. I had no idea my diagnosis would explain a lifetime of health challenges literally starting from birth (e.g. anemia, food intolerances, interstitial cystitis).

Thankfully, I also had no idea the ridiculous amounts of science and policy I would need to learn to stay alive. On the five-year anniversary of my MCAS diagnosis, I would like a damn degree.

To my fellow MCAS badasses, I want to say MCAS gets easier. To everyone else, I want you to know every day is a painful nightmare. It is really a combination of both. You collect tools and learn how to adapt.

How I describe the past five years:

For me, 2015 was much harder than 2020. Although MCAS wasn’t a death sentence, it did feel like torture. Every day was painful and treacherous. It felt like no one was willing or able to help me. Isolating wasn’t enough. While I know how lucky I was for receiving a diagnosis, I am certain an earlier diagnosis could have prevented the worst year of my life. This is why I get so upset that affordable MCAS testing and evaluation is no longer available at the university, let alone in Minnesota. At least, there’s a lot more information and support online today.

Today, I celebrate my diagnosis and the healing it has provided through treatments and accommodations. Tomorrow, I continue fighting for access to MCAS testing and treatment.