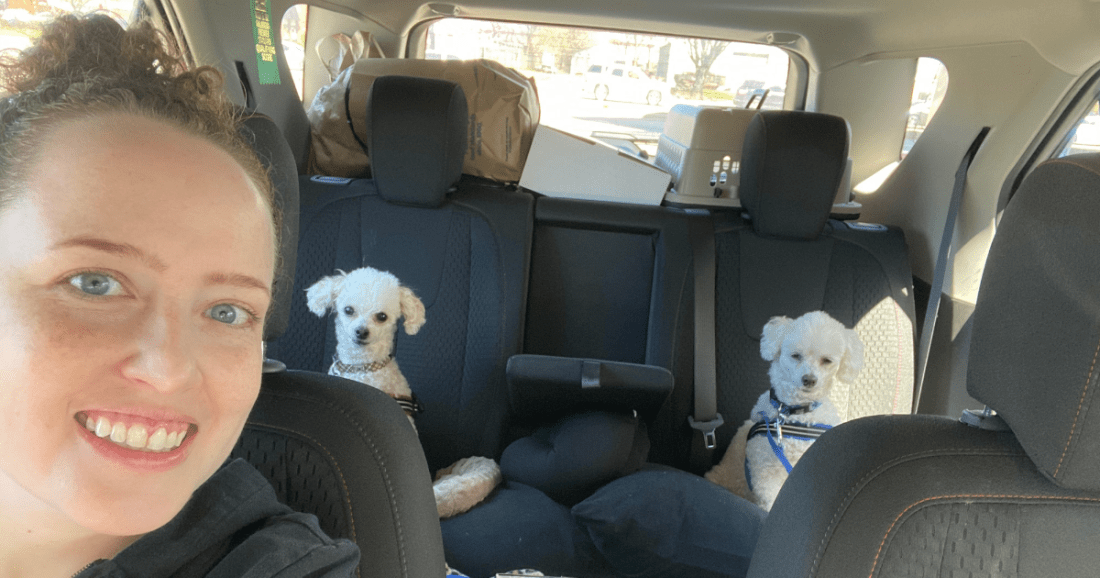 In typical mast cell activation syndrome (MCAS) fashion, the last day of the AKC National Agility Championship was a bit of shock. I try not to set expectations, because it’s impossible to anticipate all the variables that could trigger a MCAS reaction, but still, even after five years of diagnosis, my mast cells surprise me.

After finishing my run at 10 am and touring the Gilcrease Museum gardens in memory of my grandma, Team Quixote left Tulsa enroute to Kansas City to break up the drive back to Minnesota. By the time we got to a SAFE hotel room, I was delirious with relief, exhaustion, and vanilla.

On Monday, Team Quixote arrived back in Minnesota. I could not wait to wash all my clothes, bathe the dogs, and rest. I began my prednisone taper and Julia returned home, but the excitement continued. On Wednesday, ESPN profiled Quixote and me on the broadcast of the AKC National Agility Championship. On Friday, my local newspaper interviewed me. Read the article.

I felt incredible the entire week, despite completely coming off prednisone. I have said agility is my medicine, but this was suspiciously the easiest prednisone taper I had ever experienced. It was as if I hadn’t tapered at all.

So when I suddenly felt terrible on Tuesday, nine days after our return home, I assumed it was the prednisone taper. I hopped into bed, accepting my punishment for a successful trip, and turned on some terrible reality TV. My foot itched, so I unrolled my sock to reveal to red bumps. Nothing extraordinary for the MCAS patient, but it kept bothering me, so I pulled off the sock.

I instinctively poked it and that demon just rolled right off because it was so engorged. I screamed, so Sancho tried to eat it, as if that would save me. Somehow, I managed to slide its fat, gray body into an empty pill bottle, secure the lid extra good, put it in the refrigerator, and then shut the refrigerator door extra good.

I knew nothing about ticks but sometime during my full-blown panic attack I managed to send pictures of it to the TickEncounter at University of Rhode Island. Yes, I had pulled ticks off me at the Gilcrease Museum, but we did tick checks in Kansas City and when we got home. And we had been home for nine days! I did not tell the Unversity of Rhode Island I had been traveling. Luckily, they responded in a couple hours:

“Hmmm….this is an unusual tick for your location; you’ve encountered a nymph Lone Star tick (Amblyomma americanum). This one looks like it was attached and feeding for 2-3 days.”

“You may be interested to learn that Lone Star ticks do not transmit Lyme disease bacteria, but they are aggressive biters and can transmit some other nasty germs. Studies suggest that about 10% of Lone Star ticks may carry Ehrlichia chaffeensis, the germ causing human monocytic ehrlichiosis, and Borrelia lonestari, a non-Lyme disease borrelia. In some people, bites from Lone Star ticks have been associated with development of a condition called STARI (southern tick-associated rash illness–cause unknown), and also development of a curious allergy to red meat.”

So basically, this nightmare was living with me all week, probably in my shoe. I had no idea that was a possibility. I’ve become accustom to many medical terrors over the last five years, but the horror of an insect visibly feeding on my body for 2-3 days without my knowledge provoke an identity crisis.

I considered burning my condo down, but I decided that might be unfair to the other residents. The poodles were fine, probably because they don’t wear shoes in the spring.

The next morning, I found two more pus-filled lesions on my stomach in addition to the two on my foot and a slight fever began. Luckily, I started compounded doxycycline by the afternoon. On Thursday, two more lesions appeared on my hip, one with a bullseye. The fever continued and a knife-like pain shoot through my right Achilles tendon. By Friday, I could no longer walk on the foot, so I went to urgent care to check my blood, liver, and kidneys, which were fine.

The inflammation in my right foot tendons spread to my left foot, and I haven’t been able to walk without crying for NINE DAYS. Sleeping is difficult and living alone feels impossible. While my dogs try their best to help, we disagree on basic upkeep like how to wash the dishes.

“I think you are low risk for an Achilles rupture,” my primary care doctor said.

“That’s what they said about my CSF leak,” I replied.

Even if there was a way to conclusively know which bacteria the Lone Star tick transmitted, doxycycline is the treatment. (My test for ehrlichiosis was negative, but I had already started the antibiotic. I did send the tick in for an autopsy.) I am certain the inflammation is related to hEDS, and doxycycline helps protect inflammation for damaging connective tissue like tendons. Doxycycline also inhibits mast cells, which is interesting because…

My MCAS appears to be in remission.

Many MCAS patients experience less MCAS symptoms when their immune systems are actively fighting an infection or recovering from an injury. I tend to feel my best after a surgery, even without pain medication. I tend to confuse people when I win first place in agility two days after surgery. For me, I have less gastrointestinal pain, my joint glide easier, and my whole body feels lighter, when my immune system is busy.

Now I’m not recommending weekly surgeries or tick bites to control mast cell disease. However, if your MCAS does go in remission, I am recommending jalapeno tamales. So far, I’ve eaten four of them and they weren’t even spicy. Even on prednisone, I normally wouldn’t be able to tolerate a bite. Now, I’m enjoying beans, onions, garlic, tomatillos, jalapeños, and polite pooping 12-14 hours later.

The wildest part is despite my digestive fiesta, for the first time in five year, my geographic tongue has completely healed. Many MCAS patients have smooth, red patches on their tongues, indicating inflammation of the gastrointestinal tract. (Histamine and other inflammatory chemical released by mast cells can destroy the digestive lining.)

I certainly wouldn’t trade tamales for the ability to walk, but I am trying to enjoy them before my world flips again. I am very worried about alpha-gal allergy. Basically, it is an IgE allergy to red meat that can develop 1-3 months after a Lone Star tick bite and mast cell disease is a risk factor.

All the vegans and vegetarians are like, “Boo-hoo, so you can’t eat red meat. Get over it, murderer.”

MCAS really limits my safe food, but I’m mostly concerned because MCAS also really limits my medications. Right now, the only capsule I tolerate at my compounding pharmacies is made of gelatin. At least two of my medications contain gelatin, and not sure about alternative solutions. Liquids cause more logistical problems, as if I don’t have enough already. I have no idea if/when my medication will cause anaphylaxis.

In short, I’m just waiting to scream, “They’re baaaaccck,” when my mast cells blow up my body. In the meantime, I’m going crawl across my condo and stuff another jalapeño tamale in my face.

I am still in full remission taking 100mg doxycycline a day, in addition to a basic mix of first line treatment. I can eat and do whatever I want. When I tapered down to 50mg, I started to have symptoms. I also stopped my dysautonomia medication because I no longer have symptoms and my heart rate is consistent 72 bpm! A small subset of MCAS patients have also experienced stabilization with doxycycline and there’s research to explain it.

My Lone Star tick test came back negative for the following:

So the two most likely theories for my infection are southern tick-associated rash illness (STARI), or the tick was radioactive and now I am Tickwoman. I’m still not sure if I have alpha-gal allergy because I haven’t eaten meat since going into remission and it may be too soon to check for antibodies.

Be sure to check out my Instagram for videos of my remission adventures!

Five years ago, I became allergic to exercise. When I ran, or even walked, my throat swelled, my organs screamed from lack of oxygen, and my heart pounded so loud I thought it might explode. I worried I would never be able to compete in agility.

Today, my heart still might explode, but only metaphorically. We did it! Quixote and I not only survived, but enjoyed the AKC National Agility Championship! I may be disabled, and he may be old, but we are athletes!

And we’re going to be on ESPN2 tonight! Quixote and I will be profiled during the airing of the AKC National Agility Championship, starting at 8 PM ET/ 7 PM CT/ 5PM PT. Our segment will run in the 2nd hour, after the 20″ dogs.

In the meantime, if you haven’t already, check out my AKC NAC video series. I will be releasing one more video after the ESPN2 profile. Thank you so much for your incredible support! I certainly couldn’t have done this on my own. 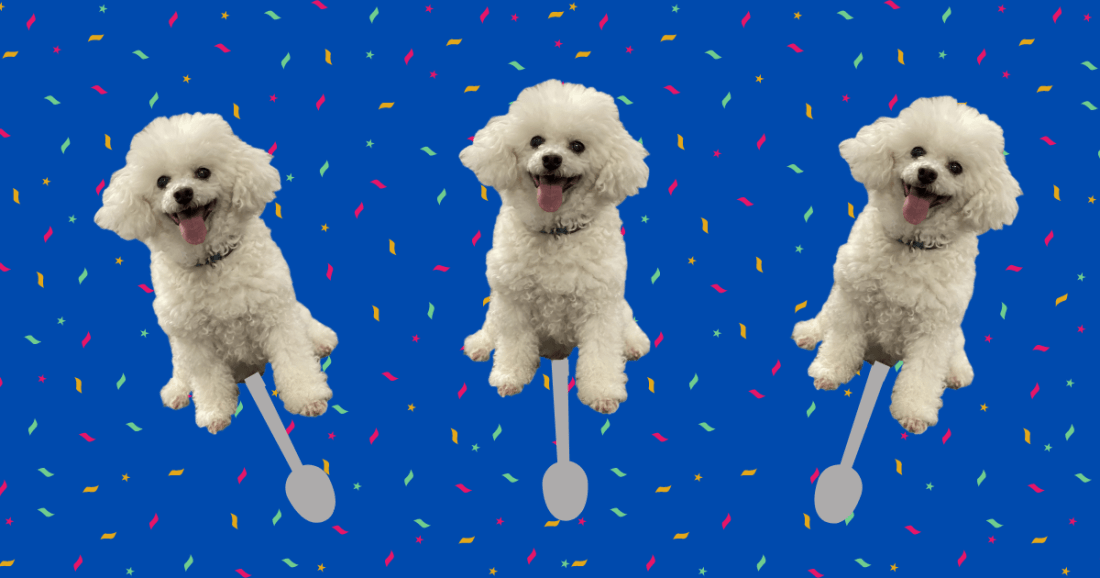